You found it! Vodka terms, trivia, cocktail recipes, and more. Knowing vodka terms can help you enjoy and describe vodka better. And learning vodka trivia can amaze your family and friends. It’s fun!

Vodka is a clear, colorless, tasteless, neutral distilled spirit. Producers don’t age it. Distillers have commonly make it from potatoes or grains.

People around the world drink more vodka than any other distilled spirit. To be specific, they drink about 4.44 billion liters per year. That’s much more than they consume of rum, the second most popular. People consume about 1.44 billion liters of rum each year.

People tend to associate vodka with potatoes. However, today most is distilled from corn, barley, rye, and other grains. Producers distill most vodka at least three times to remove impurities. This increases the alcohol content. To reduce it to standard levels, producers add water to achieve the desired level. They also usually filter it as well.

National Vodka Day in the U.S. is October 4.

There are two major categories of vodka. One is neutral or unflavored. The other is flavored. Popular flavors include vanilla, chocolate, cinnamon, various fruits, ginger, and red pepper. But there are many more.

The “vodka belt” consists of Norway, Sweden, Finland, Iceland, Russia, Estonia, Latvia, Lithuania, Belarus, Ukraine and central and eastern Poland. (In the map, blue is the vodka belt. Brown is the beer and purple is the wine belt.) People in the vodka belt tend to drink their vodka neat. That is without chilling it, pouring it over ice cubes, or mixing it with anything.

Elsewhere, people tend to drink it in cocktails and mixed drinks. Some of the most popular include these. (Click link for recipe.)

A screwdriver walked into a bar. The bartender said “Hey, we have a drink named after you!”

The screwdriver said “You have a drink called a Phillip?”

These are the most popular brands.

Most people choose their favorite by sampling a variety.

About 25% of all alcohol that people consume around the world is vodka or contains the beverage.14

Distillation emerged during the Middle Ages. The alcohol produced was aqua vitae or “water of life.”15

Each molecule of alcohol is less than a billionth of a meter long. It consists of a few atoms of oxygen, carbon and hydrogen.17

Our body absorbs alcohol in a carbonated drink faster than in an un-carbonated one.19

All vitamins and minerals necessary for human life exist in alcohol beverages.20

ABV is alcohol by volume.

ABW is alcohol by weight. Alcohol equivalence. Standard servings of beer, dinner wine or distilled spirit all have six-tenths of one ounce of alcohol.

Vodka or Water of Life

Distillers first made vodka or “water of life” for medicinal purposes. But it’s still useful medically. In Australia, it saved a man’s life. He had consumed ethylene glycol. That’s a common ingredient of antifreeze and can cause kidney failure.

Alcohol is administered to such patients because it inhibits the toxic effects of ethylene glycol. But the hospital soon ran out of its pharmaceutical alcohol.

So doctors switched to other alcohol. They drip-fed him the equivalent of three shots of vodka per hour for three days. Fortunately he recovered after receiving the “water of life.”21

Aqua vitae (ah-kwuh-vee-tie) or “water of life” is the original name of distilled spirits. Distillers first made them for medicinal and health purposes. Research now shows that moderate drinkers of spirits tend to have better health than either abstiners or heavy drinkers. They also tend to live significantly longer. (The same is true of beer and of wine drinkers.)

Call Drink. When a customer orders a drink giving the brand names of both spirit and mixer. For example, Smirnoff and Coke.

Congeners are substances in alcohol. Darker alcoholic beverages have higher levels. They add flavors. Unfortunately, they can make a hangover worse. But the lighter the beverage, the fewer congeners.

DISCUS is the Distilled Spirits Council of the U.S. It’s a trade group of leading distillers.

Distillation is how distillers separate alcohol from water. Alcohol evaporates at a lower temperature than water. Therefore, it evaporates first. Distillers then condense it back into liquid. 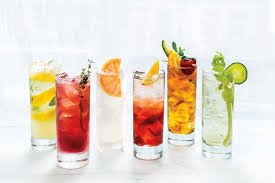 Highballs are made with almost any distilled spirit, ice, and any of a number of carbonated beverages.

Liquor historically referred to any alcohol beverage. However, today it generally refers only to distilled spirits.

Neat is a spirit with no ice, mixers, or chilling. That is, it’s right out of the bottle.

On the rocks is a beverage poured over ice cubes.

Package store is another name in the US for liquor store. Package stores sell “package goods.”  That’s because of laws requiring that alcohol containers not be visible in public. Therefore, clerks place them in paper bags or “packages.”

Proof is a measure of alcoholic level in a beverage in the U.S. It’s twice the alcohol by volume. For example, a 40% ABV would be 80 proof. Many countries use ABV instead

Shooter is a mixed drink. The bartender serves it straight up in a small glass. The drinker swallows the drink in one gulp. Differs from neat because it contains a mixer.

Straight up or up is a chilled spirit or mixed drink without ice.

Yeast are single cell organisms. They convert sugar into alcohol and carbon dioxide.

3  The Role of Beverage Congeners in Hangover.

Please note. No one provides any benefit for posting any brand name or image.

Know of any vodka terms, trivia, recipes, etc. that should be included? If so, contact hansondj[at sign]potsdam[dot]edu/ Many thanks!