Many people ask what’s a speed trap. And also if it’s any different from strict enforcement.

Actually, there is a difference. Determining what’s a speed trap and what’s strict enforcement is based on intent.

If the primary purpose is really to raise money, it’s a speed trap. If it’s really to improve traffic safety, it’s vigorous enforcement. Of course, those who operate speed traps always publicly insist their goal is safety.

The distinction is somewhat subjective even when defined by law. For example, one California law defines a speed trap as “an artificially low speed limit combined with excessively high enforcement.”

Fortunately, all states have adopted a standard engineering test for road safety. One purpose is for establishing appropriate speed limits. These engineering reports can help establish what’s an “artificially low speed limit.”

For example, engineers designed a road in Oregon for a speed limit of 35 mph. However, the posted limit was only 25 mph. After 30 years, a judge finally declared that speed limit illegal.

The “pedal test” is simple. (1) Drivers reach (pull even to) a speed sign with a lower speed posted. (2) They lift their feet from the gas pedal. (3) They then coast to the new legal speed. (4) They should not have to apply their brakes to avoid a traffic ticket. Speed traps may measure speed close to the sign in violation of the pedal test.

Some speed traps set up a series of different speeds within a fairly short distance. This makes it hard for drivers to avoid unintentionally violating the speed law. Even if only by one or two mph. 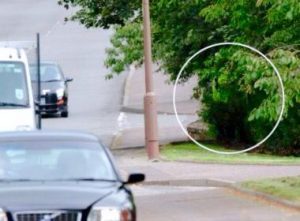 Relatedly, they may post a number of signs together so as to cause driver confusion. This leads to unintentional violations. Again, that generates income.

“Road conditions” can be used arbitrarily to justify ticketing drivers who are driving at or below the posted speed limit. A moist road from an earlier very light drizzle. Construction near the road. Any of a number of “road conditions” will suffice.

Some towns go to great lengths to ensnare victims. A good example is the tiny village of Hampton, Florida. Its 477 residents live a mile from U.S. highway 301.

However, it obtained an easement on a 1,260-foot section of the highway and annexed it. (Consequently, the map of the village looks like a big lollipop on a stick.)

A Hampton cop sat on a lawn chair with a radar gun while his partner pulled over the hapless victims. In a single year they wrote 9,515 speeding tickets. That brought in more than $253,000.

Much of the money went into the police department. At one point, there was one police officer for every 25 residents. It was a money-making machine. But an investigation and audit by the state found widespread corruption. The legislature even debated revoking the town’s charter.

Only Two Speed Traps in U.S.? 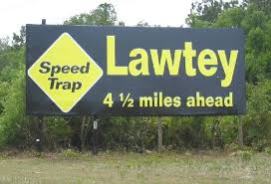 Incredibly, the American Automobile Association (AAA) doesn’t even consider Hampton to be a speed trap.

It considers only two places in the entire U.S. to be speed traps. Unfortunately, the AAA doesn’t appear to be as concerned about motorists as one might hope.

The only speed traps are supposedly the nearby towns of Lawtey and Waldo. Waldo has been very resourceful in devising its plan. 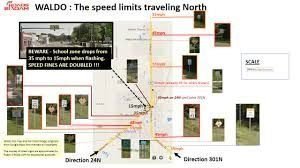 During the 1950s and 1960s, the small town of Ludowici in Georgia became notorious nationally as a speed trap. The police used a switch to change a green traffic signal suddenly red. They used it to fleece non-local motorists.

The town of Crofton in Kentucky, until recently, got 90% of its total budget from traffic tickets.

The governor objected to the practice, which was giving the state a bad name. But he failed to convince the police to stop the practice. So he posted large billboards warning drivers. After locals tore one down, he posted highway patrol officers 24/7 to protect them.

Ludowici no longer has a reputation for tricking drivers.