President Herbert Hoover established the Wickersham Commission in May of 1929. He appointed former U.S. Attorney General George W. Wickersham to head the Commission.

It was officially the U.S. National Commission on Law Observance and Enforcement. But people called it the Wickersham Commission.

I. Purpose of the Commission 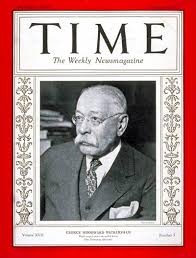 President Hoover formed the Commission pursuant to an act of Congress. The 11 members of the Commission were to study the enforcment of laws and the improvement of the judicial system. They were also to study the special problem and abuses caused by National Prohibition.

The Wickersham Commission included leading experts on criminal justice. It also had such luminaries as Roscoe Pound, dean of Harvard Law School. There was Newton D. Baker, former Secretary of War. And also Ada Comstock, President of Radcliffe College.1

The Wickersham Commission report was the most comprehensive assessment of criminal justice in the U.S. to that time. The Commission published its reports in 14 volumes during 1930 and 1931.

President Hoover had apparently created the Commission to make recommendation for improving the enforcement of National Prohibition. This was to counter the rapidly growing Repeal movement. Prohibition was the burning issue of the day and highly divisive. The breadth and scope of the Commission’s reports were impressive. But most peoples’ interest was really only in the report on Prohibition

Most members of the Commission concluded that it was impossible to enforce Prohibition adequately. The Commission found that a large proportion of the population did not support Prohibition. In addition, many were contemptuous of it and took pride in violating it.

Those who illegally produced and sold alcohol made enormous profits. The large profits led to widespread corruption of law enforcement and elected officials. And Prohibition promoted organized crime, gangsterism and violence, most victims of which were entirely innocent.

National Prohibition of Alcohol in the U.S.

Prohibition reduced tax revenue. But it dramatically increased government expenses. It caused the need for more prisons, enforcement agents, judicial costs and other expenses. Attempting to enforce Prohibition cost two-thirds of of the entire federal budget for law enforcement. That did not include the enormous costs faced by state and local governments.

However, the Commission’s report on Prohibition lacked consensus. Views ranged from maintaining the status quo to immediately repealing Prohibition. Although a majority of members expressed varying degrees opposition to it, they also opposed its repeal.

This led columnist Frank P. Adams of the New York World to write his now-famous poem about the Commission’s report.

Prohibition is an awful flop.
We like it.
It can’t stop what it’s meant to stop.
We like it.
It’s left a trail of graft and slime,
It don’t prohibit worth a dime,
It’s filled our land with vice and crime.
Nevertheless, we’re for it.2

The report also included separate statements by members of the Commission. These showed a broad diversity of individual opinions and disagreements. While some supported Prohibition, others didn’t.

Member Harry Anderson, a distinguished economist, said that Prohibition violated basic economic laws. He asserted that even if complete enforcement were possible, economic laws would win in the end. “This would inevitably lead to social and political consequences more disastrous than the evils sought to be remedied. Even then the force of social and economic laws would ultimately prevail. Governments cannot destroy these laws. But often in the course of human history they have destroyed.”

The Prohibition report was highly qualified and inconsistent. This permitted both sides to claim victory. Although its report on the issue was indecisive, the American people were clearly not. They rejected Prohibition by a very decisive 74%. Repeal of the failed social experiment occurred in 1933.

Prohibition failed abysmally. It created rather than solved problems. Yet today, almost one in five U.S. adults favors making drinking any alcohol illegal for everyone. Ironically, not even National Prohibition outlawed drinking alcohol.

Many more people support neo-prohibition ideas. They also strongly defend the many vestiges of Prohibition that continue now. Even though the country repealed Prohibition in 1933.

VI. Resources on the Wickersham Commission

Berman, J.S. Prophets Without Honor: The Wickersham Commission and the Development of American Law Enforcement. Thesis. Michigan State U., 1973.

Boehm, R.. Records of the Wickersham Commission on Law Observance and Enforcement. Bethesda, MD: U Pub of Am, 1996.

MacKay, A. An Exploratory Study of the Wickersham Commission: From Crisis to Commission to Confusion. Thesis. U. Florida, 1971.

The Mooney-Billings Report: Suppressed by the Wickersham Commission. NY: Gotham, 1932.