Wine myths continue to fool us. The problem isn’t new. It was long argued that good wine could be made in many places, but great wine could only be made in France. Evidence to the contrary was known but discounted. The historic Paris wine tasting in 1976   soundly  disproved that myth. It did so in blind tastings using the palates of leading French wine experts themselves. And it completely revolutionized the world of wine.

Alcohol and the Body Trivia.

But surprisingly, many people continue to believe that myth. And there are many more wine myths.

The scientific evidence from blind tastings consistently disproves this myth. There is virtually no connection between how much a wine costs and how much people like it. In fact, a study of over 6,000 blind wine tasting comparisons found the correlation between price and overall rating to be small and negative. This suggests that people tend to prefer less expensive wines more.1

The Secret to Finding Good Wine at a Good Price!

Wine Spectator columnist Matt Kramer asserts that the price of wine tells us nothing about its quality. That ‘to believe otherwise is to believe in a myth.’ Why do we expectmore expensive wine to taste better than less expensive wine? It’s psychological. Kramer quotes Thomas Payne: ‘That which we obtain too easily, we esteem lightly. It is dearness which gives everything its value.’3  A few years ago a vintner was having difficulty selling his $75 per bottle wine. Shortly after raising the price to $125, he had difficulty meeting the resulting demand.

The demand for a specific wine is influenced by many things. They include advertising, press coverage, and association with celebrities. And with perception of quality, tradition, fad, and many other factors. But it’s supply and demand rather than actual quality that determines the price.

The belief that expensive wine is better is one of the most enduring of all wine myths.

Producers may consider some of their wine to be superior and label it reserve or a similar term. Or they may label some that way to obtain a higher price.

Roman Weil asked experienced wine enthusiasts to blind taste a regular and a reserve bottling. The wines were from the same producer and year. The tasters weren’t very good at distinguishing between them. Among those who correctly identified the reserve, only about half (under 52 percent) preferred it over the regular bottling. (The regular bottle was $56 whereas the reserve was $200.)4

3. Corks are better than screw caps. 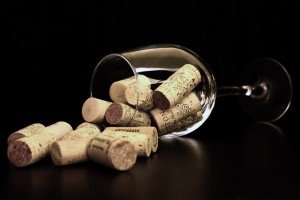 Long-term research has proven that screw caps are much superior to corks in protecting wine.

Some experts believe that about one of every ten to twelve corked bottles of wine suffers ‘cork taint.’ This causes the wine to smell like wet newspapers or a damp basement. The defect is caused by the bacterium 2,4,6-trichloroanisole (TCA). Corks infected with the bacterium transmit it to the wine through contact.

Imagine that wine bottles had traditionally been sealed with twist-off caps. Also imagine that someone suggested a new way to seal them. His idea was to seal them with bark from a tree. Now imagine the laughter and ridicule!

4. Only red wine has health benefits.

The health and longevity benefits of drinking in moderation comes from alcohol. Some research finds wine, especially red wine to provide greater health benefits. Other research reports that any wine give the benefits. Some studies find that beer is best. Some find that distilled spirits liquors are the most beneficial. However, most research find that it makes little or no difference. The most beneficial ingredient in alcoholic beverages seems to be the alcohol itself. And the health benefits are substantial.

5. Organic wines have no sulfites.

All wines contain sulfites because they are a natural result of fermentation. Sulfites are also commonly added to prevent oxidation, help preserve, and stabilize the wine. Organic wines have no added sulfites as stated on their labels.

6. Wine improves with age and aged wine is better than young wine.

Today, wine is produced to be consumed when purchased. There’s no reason to age wines. The vintner has already done that. Further aging may change the taste, bouquet, and finish or after-taste. Some people enjoy these changes. But the wine slowly deteriorates.

In addition, aging to improve a wine’s defects is impossible. Defective wine will always be defective. Organic wines deteriorate much quicker. They have no sulfites added to help preserve them.

It’s not clear how the aging wine myth started. Ancient Greeks and Romans preferred aged to young wine. And Luke praises it in the New Testament. But these are some of the same people who thought wine was improved by the addition of seawater, turpentine, rosin, and pitch.

The beliefs that aging improves wine after purchase one of the most widely believed of all wine myths.

7. Wine should be opened so it can ‘breathe.”

There’s an historical reason for exposing a newly opened bottle of wine to the air before drinking it. When wine making was an art with little scientific guidance, vintners often added too much sulphur as a preservative.

To let the unpleasant odor dissipate, wine bottles were opened early to expose the contents to air. Most often it was decanted to speed the process. Today, wine does not smell of sulphur and there is typically no reason to let it ‘breathe away’ any unpleasant fumes.

Furthermore, simply opening a bottle an hour or two before serving does virtually nothing to aerate it. Research has found that too little air can circulate through a neck of the bottle to aerate effective in as long as 24 hours. The air is literally ‘bottle necked.’

It’s sometimes said that ‘the thicker the legs, the better the wine.’ Wine legs are the “tears” that flow down the inside surface of a wine glass after it has been swirled. Contrary to myth, legs are not an indicator of quality.

Wine legs are a result of the Gibbs-Marangoni effect.

‘While some people believe that the presence and thickness of legs relates to the sweetness, viscosity or quality of wine, none of these is correct. Legs form because of the alcohol content of the wine and the effects of surface tension, adhesion and evaporation. The alcohol, because it has a lower surface tension, tends to crawl up the glass. At the same time, it evaporates faster than the water in the wine because of its lower boiling point. As more alcohol evaporates, the water concentration increases. The greater surface tension of the water causes the wine to pull together into a teardrop that then runs down the inside of the glass.’5

Vintage Champagne is made from grapes harvested within the same year or vintage. Its specific characteristics vary from vintage to vintage. Non-vintage Champagne is blended from wines of different vintages. This results in consistency from year in the style for which the producer is known.

10. Smelling the cork reveals if the wine is bad.

Not so. Smelling a cork won’t give any information about the quality or condition of the wine. It’s always smelling the wine itself that tells whether or not it has spoiled.

Looking at a cork in a restaurant can confirm that the producer and vintage are the same as ordered.

If you are disillusioned that any of these beliefs are actually wine myths, please don’t whine.

1. Red wine should be served at room temperature.

Red wine should be served at room temperature.This guideline began long ago when rooms were poorly heated and generally quite cool. But serving red wine at room temperature today typically results in serving it perhaps ten degrees or so F or about four degrees C warmer than ideal.

That’s a myth unless you store wine casks in your cellar. Casks are wooden and high humidity helps keep them tightly sealed. That way they lose less wine. But corks in wine bottles are kept moist by wine on one side. The other side is sealed with a capsule.6

A wild and unpredictable bacterium, Brettanomyces (commonly called Brett), can create odors like a just-ridden horse or a barnyard. It can also produce vinegar if it infects the wine.

Modern brewers and vintners, aware of the problem and its cause, sanitize equipment very carefully and repeatedly to prevent outbreaks of Brett. However, in the past, vintners and consumers had to live with the unique odors and tastes of wines commonly infected by Brett.

This is understandable. People raised on raw cow’s milk get used to its strong ‘cow’ or barnyard taste that most people find very unpleasant. Such people prefer it to pasteurized milk.

Similarly, people raised on Brett-tainted wine acquired a taste for it. This established a tradition in which the tainted wine was enjoyed. Today, there are people who prize a little horse manure, so to speak, in some of the wines from Burgundy. Is the wine spoiled? You decide if this is one of the wine myths.

4. Wine should be decanted.

Wine needs to be decanted (poured into another container) only if there is visible sediment at the bottom of the bottle or if, for some reason you want to aerate the wine.

5. Dessert wine should be served with dessert.

Only if you like sweetness that is overbearingly sweet. A child would enjoy the combination of a sweet wine with pecan pie but adults usually mature out of such taste. The interplay of contrasting flavors is typically more pleasing to mature palates. Of course, dessert wine by itself can be dessert. After all, that’s what it’s called.

2  Brouchet, F. Chemical Object Representation in the Field of Consciousness. Presentation. Posted on website of the Amorim Academy.