The Woman’s Christian Temperance Union (WCTU) is the oldest voluntary, non-sectarian women’s organization in continuous existence in the world. In addition, it was among the first groups to keep a lobbyist in Washington, D.C. to promote its agenda.

Women were very active in public activities and political matters throughout the 19th century. This was especially the case when the issue was seen as a moral one. The first major issue women addressed was the abolition of slavery. The second was the attack on drinking.3

The group reports that “The WCTU was organized by women who were concerned about the destructive power of alcohol and the problems it was causing their families and society.”1

It elaborates that “In many towns in Ohio and New York in the fall of 1873 women concerned about the destructive power of alcohol met in churches to pray and then marched to the saloons to ask the owners to close their establishments.”2  This was the Women’s Temperance Crusade.

Within the first five years, the WCTU established a network of over 1,000 local units or “unions.” It also began publishing a journal, Our Union. The group continues to publish that journal today.

The WCTU defines temperance as “moderation in all things healthful; total abstinence from all things harmful.” 4 It considers any amount of alcohol to be harmful. For this reason it rejects the mainstream Christian belief. That is, that the consumption of alcohol in moderation is not sinful.

The WCTU similarly rejects the medical consensus that drinking in moderation is healthful. Instead, it promotes total abstinence.

National Prohibition (1920-1933) was a cultural war. It was between Protestants who were already well-established in North American and the newer Catholic and Jewish immigrants. The latter typically drank alcohol beverages as part of their cultures.

In addition, Protestants tended to live in rural areas and towns. On the other hand, the newer immigrants tended to settle in large cities. This also caused another division. 5

WCTU membership included women from nearly every sector of American life. However, it consisted largely of lower-middle and middle-class women. They tended to have strong ties to evangelical Protestant churches.

The WCTU had chapters throughout the U.S. and Canada with a very large membership. But for years it did not accept Catholic, Jewish or African-American women. Nor women who had not been born in North America. This also reflected the cultural conflict.

When the WCTU began accepting African-American women, they were organized into separate chapter or unions. Black members tended to be teachers or other professional.

The WCTU was anxious to “Americanize” new immigrants. That is, to persuade them to abstain from alcohol beverages. During first two decades of the twentieth century much of its budget was spent on its center on Ellis Island. The goal was to begin this “Americanization” process. The WCTU was especially concerned about the immigration of Irish and Germans. It believed they threatened temperance and the promotion of prohibition.

One WCTU leader expressed strong concern over “the enormous increase of immigrant population flooding us from the old world, men and women who have brought to our shores and into our politics old world habits and ideas [favorable to alcohol].” So she peppered her writing with references to this “undesirable immigration” and “these immigrant hordes.” 6

The temperance movement was largely anti-foreign, anti-Catholic, anti-German and anti-Semitic. 7 The WCTU also supported eugenics. The Ku Klux Klan (KKK) actively promoted Prohibition and its strict enforcement. In fact, the WCTU and the KKK were partners. Many women belonged to both the WCTU and the KKK. They sometimes held leadership positions in both organizations.

The Ohio Historical Society made an important observation. “From the mid 1870s to the early 1890s, the Women’s Christian Temperance Union was the major organization within the United States seeking Prohibition.”

The Society continued. “Its members utilized rather extreme tactics to convince Americans to abstain from alcohol. Members picketed bars and saloons. They prayed for the souls of the bar patrons. They also tried to block the entryways of establishments that sold liquor.” 8

Yet these tactics were tame in comparison to those of perhaps the WCTU’s most famous member, Carry A. Nation. (Carrie is also correct.) She founded a chapter of the group in Kansas. Nation believed that God guided her. And she was imposing as a stout six foot tall woman. She would storm into drinking establishments dressed in a black dress and bonnet. Nation had a bible in one hand and a hatchet in the other. By the time she left, her aggressive vandalism would have caused considerable destruction.

Historian Lindsey Williams described one of her expeditions before she had begun using a hatchet.

Carry took the train to Wichita and spent the first day searching for an appropriate victim. She had not intended to make herself known just yet, but lost her composure in the Hotel Carey bar room.

A large, risqué painting of Cleopatra At Her Bath caught her eye. She marched up to the bartender and shook her quivering forefinger at him. “Young man,” she thundered, “what are you doing in this hellhole?”

“I’m sorry, madam,” replied the bartender, “but we do not serve ladies.”

“Serve me?” she screamed. “Do you think I’d drink your hellish poison?” Pointing to Cleopatra, she demanded, “Take down that filthy thing, and close this murder mill.”

With this she snatched a bottle from the bar and smashed it to the floor. Carry marched out of the bar room amidst incredulous stares of the many imbibers.

Returning to her room she withdrew a heavy wooden club and an iron bar from her suitcase and bound them into a formidable weapon.

In the morning she returned to the Hotel Carey, concealing her club and a supply of stones under the black cape that became her trademark. Without a word, she began her labors by demolishing Cleopatra At Her Bath. “Glory to God, peace on earth and goodwill to men,” she shouted as she flailed against mirrors, bottles, chairs, tables and sundry accessories. Whiskey flowed in rivers across the floor.

The hotel detective found Mrs. Nation beating furiously on the long, curving bar with a brass spittoon. “Madam,” he said sternly, “I must arrest you for defacing property.” 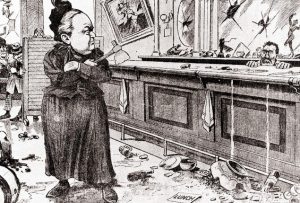 Police arrested Nation 30 times. Yet her resulting notoriety proved both useful and profitable. She became known internationally for her “hatchetations.” As a result of her efforts the Kansas WCTU presented her with a gold medallion. It carried the inscription, “To the Bravest Woman in Kansas.” 10

Her lectures, publications, the sale of miniature hatchets, etc.  generated substantial income for the rest of her life.

The WCTU provided a mechanism through which many women expressed their views on social and political issues. Indeed, it considered itself the voice of all American women.

In a congressional hearing in 1929, the president of the WCTU shouted “I represent the women of America!” But when Pauline Sabin heard that she thought, “Well, lady, here’s one woman you don’t represent.”11 Consequently she organized the Women’s Organization for National Prohibition Reform (WNOPR).

Her organization challenged the assumption that virtually all women in the country supported National Prohibition.

Not a One-Issue Group

Although the WCTU is most closely associated with the prohibition of alcohol, it has never been a one-issue organization. Frances Willard was the second president of the organization. She asserted that “Our policy is ‘The Do-everything-policy, and do it all the time.'” 13

Accordingly, it has addressed a number of other social reform issues.

The group currently emphasizes abstinence from alcohol and drugs, pornography, same-sex marriage, premarital sex, and gay sex. On the other hand, it promotes keeping Christ in Christmas. Therefore, it opposes the use of “happy holidays.”

The WCTU remains vocal on issues about which it is concerned. For example, the Amethyst Initiative is an effort by many college presidents to promote discussions about how best to reduce alcohol abuse. Also alcohol-related problems among young people, including adults 18-20 years of age.

The WCTU responded to this call for public discussion about alcohol. In so doing, it presented the Amethyst Initiative with the first annual WCTU Millstone Award. It explained that “The Millstone Award was created to bring public awareness to a person, organization, or governmental body that creates or uses their (sic) position of influence to promote unhealthy (sic), illegal, or immoral behavior that we believe places children at risk.” 14

President Obama shared a beer with Henry Lewis Gates, Jr. and James Crowley at the White House. The press dubbed it “the beer summit.” However,  the president of the WCTU complained about the choice of beverage. She said that “There are so many other beverages he could have chosen that would have served just as well.” Instead, she suggested lemonade or iced tea. 15

Currently, the WCTU claims 5,000 members, a staff of four, and an annual budget of $250,000. However, the Union Signal has a circulation of only 550. 16 The group describes itself as dedicated to educating young people. Specifically about the harmful effects of alcohol, illegal drugs, and tobacco. It also works to build support for total abstinence from alcohol.

National Prohibition was ineffective and created horrendous problems. Nevertheless, many people today support neo-prohibition ideas. They also strongly defend the many vestiges of Prohibition that continue to remain.

Today almost one of five U.S. adults favors prohibition. They favor outlawing the the consumption of alcohol by everyone. However, not even National Prohibition made drinking alcohol illegal!

The current membership requirements are:

Discover more about these and other Women Leaders of Temperance and Prohibition.

The WCTU was formed as non-partisan and is today. The first president of the organization was Annie Wittenmeyer. She strongly supported a non-partisan approach. However, she was voted out of office in favor of Frances Willard. The latter wanted the WCTU to support the Prohibition Party. Of course, that would make it partisan.

Many members strongly opposed this move. And one of the most powerful was Judith Horton Foster. She was one of the original organizers of the organization.

Foster entered official protests at annual conventions. And she did so four years in a row. But it was futile. So the Iowa Union and about 10,000 members left. Under Foster’s leadership, they formed the Non-partisan Woman’s Christian Temperance Union (NWCTU).

The presidents of the WCTU and their terms of office: 17

The WCTU’s logo is the white ribbon bow, which symbolizes purity. Its motto is “Agitate – Educate – Legislate.” 19

A History of the Woman’s Christian Temperance Union of California. WCTU, 1924.

Woodring, P. A Glorious Past and a Promising Future. A Brief History of the Kentucky WCTU, 1880-1995. Bethany: Bethany Christ Mission Cent, 1996.

Reports of the Woman’s Christian Temperance Union of Louisiana. Welsh: WCTU of LA.

Annual Report of the Woman’s Christian Temperance Union of the State of Maine. Hallowell: Maine W.C.T.U.

Address of the Woman’s Christian Temperance Union to the Voters. Boston: WCTU, 1877.

State Temperance Fair of the WCTU. Boston: WCTU of MA, 1876.

Minutes of the Fifteenth Annual Convention of the Woman’s Christian Temperance Union of Utah. Held at Salt Lake City: Oct 20-21, 1905.

2. The History of the WCTU.

17. National Presidents of the WCTU.